The Dramatic Works of J. Steven Manolis and His Breakthrough Accomplishments Propel Rising Values in the Art World.

In 1821, the southwestern tip of Nevada was named Las Vegas, a reference to the formerly lush valley accent- ed by artesian wells that produced these far-reaching verdant fields. “Las vegas” means “meadows” in Spanish, which metaphorically reflect the color of money that keeps this local economy thriving. Urbanization began in 1902 as a water stop on the trail, first for wagon trains and later the railroad heading westward to Los Angeles. The area was considered a good stake, and with the State Land Act offering a $1.25 per acre, farmers quickly jumped on the opportunity and made agriculture the primary industry. Considering that not long ago the purchase of a single parcel on the “Strip” totaled $34 million an acre, the original farmers made the right choice! The so-called “Gambling Capital of the World” also is synonymous with marriage and divorce, entertainment and distinctive neon signs, now featur- ing over one hundred world renowned casinos in which to place your bets, from the MGM Grand to the Bellagio to the Paris, along some of the most valuable property in the U.S.

But wagers and betting are not, of course, limited to the Las Vegas Strip, as calculating a winner crosses over into an unlim- ited number of industries, including racing (cars and horses), sports, manufacturing, investment banking, real estate, medi- cine, technology and fine art. In fact, there is a peculiar acronym having to do with “best bet” financial returns that spells out SWAG, which refers to subjects that year after year have generated some of the most valuable revenues: Silver, Wine, Art and Gold; those who invest wisely and do their homework can come out ahead. If you picked real estate or the stock market or crude oil as your sure best bet in the last decade, you likely still came up short. Precious metals have been golden, as have rare vintage wines. But nothing can compete with the eye-pop- ping auction prices achieved by savvy art collectors who also can enjoy their investments (and bragging rights) every day on their walls at home. In May 2017, a Jean-Michel Basquiat work painted in 1982 was sold by Sotheby’s at auction for $110.5 million and was surrounded with unimaginable sales numbers attained by other contemporary artists that were propelled by supply, demand and a convincing identifiable style.

Among the classic favorites in the art world are paintings that explore the visual rhythms (and often mesmerizing motion) of non-narrative color field and abstract geometrics. As Jazz and abstract expressionism arguably are the two most celebrated uniquely American art forms, there is an affinity for conceiving and collecting art in this genre. As works by first generation abstract painters like de Kooning and Pollock have become extremely rare and fetch hundreds of millions of dollars at auction and private sales, there has been a renewed interest in repeat- ing the same investment formula for acquiring promising second-generation abstractionists who possess a singular voice, exceptional education and experience, critical acclaim, museum exhibitions, prestigious publications, and the ability to portray inherent beauty and maintain high professional standards.

As the former Editor-in-Chief of The Art Economist magazine, my chief responsibility was to identify and carefully examine promising contemporary art and artists. My columns in The Huffington Post have month after month successfully predicted auction records and identified artists who are making noteworthy art that is increasing in value.

One of the artists who I have been watching closely is J. Steven Manolis, who is based in Miami and possesses all of the professional qualities listed above, making him a clear front runner for continued accolades and the making of exquisite ab- stract expressionist canvases that often are ingeniously woven together with dazzling color field theory and handsome con- structivist geometric forms. These exquisite and extraordinary compositions have moved noted enthusiasts to take action, as evidenced in Manolis’ impressive collector base.

Although with ambitions at an early age to be an artist, Manolis was persuaded by parental guidance to follow a career in finance. With natural creativity under his belt he applied inventiveness to investments and became the youngest partner in the respected firm of Salomon Brothers. But like most artists who can multitask, and in this case, balance finance with art-making, Manolis continued practicing as an artist through private lessons with the renowned colorist Wolf Kahn, who in turn had studied with Hans Hofmann, who was considered a master teacher and member of the original abstract expressionist group. With all the famed names in contemporary art, you usually can connect the dots en route to greatness by studying a personal link to artists of historic importance. For example, one of America’s most il- lustrious artists, Robert Rauschenberg, studied at the renowned Black Mountain College, where Robert Motherwell and Willem de Kooning were on the distinguished faculty.

When Manolis made the decision to become a full-time painter, much of the mechanism for success already was oiled (excuse the pun) and finely tuned to move forward securely, confidently and in automatic overdrive. Not only are critics observing a unique artistic circumstance and breakthrough; maturity of vision and years of experimentation are fused in the artist’s latest series through highly dedicated studio activi- ty. Manolis has had three solo museum shows in the last two years with more requests following. His most recent upcoming shows are a two-person exhibition at the National Arts Club in

Manhattan and a solo exhibition at the Evansville Museum of Art, both opening this fall. He drew impressive crowds for his lecture and book signing at the prestigious Society of the Four Arts in Palm Beach, and did a one-hour interview with “Voice of America” that was heard by over 100 million listeners.

Critical approval is an important consideration for the odds makers, and just like forecasting the winner of a horse race at Churchill Downs, numerous tributes secure the perceived value of the art, like researching a stock, and serve as a kind of title insurance where all the qualities investigated and evaluated add up to an artist on his way to the winner’s circle! A remarkable example of critical praise is the artist’s recent review by the legendary art critic Donald Kuspit, who observed that Manolis is the

heir-to-be of Wassily Kandinsky. Kandinsky changed the world forever on how we appreciate contemporary painting. His work, both artistic and theoretical, played a large role in the foundation of later modern movements, in particular abstract expression- ism and its variants such as color field painting. His later work influenced superstar Arshile Gorky’s development of a non-ob- jective approach, and also he was a chief inspiration of painters like Mark Rothko, and continued to be a strong, magnetic force even in the 1980s to those of the neo-expressionist resurgence in painting, including Julian Schnabel and Philip Guston.

Other noted critics have pointed to Manolis’ handsomely saturated canvases, which have developed into a clear recognizable style that is fresh and inventive. Manolis is keenly aware of art history and the appealing lineage handed down to younger artists, who established hybrid applications of painting surfaces completed by former pioneers. The artist now has complete- ly mastered his own engaging format and even has branched out to geometrical compositions, including circular forms that were a hallmark of Kandinsky. This unusual combination has impelled the art world to pay attention while the collector base for a Manolis painting continues to expand weekly. Like every new discovery, the art of amassing works of art is based on personal taste and a deep attraction to the work, especially at an opportune time when procuring a Manolis work is considered by many, including this writer, to be the “Odds on Favorite.”

For your own personal preview, Manolis has created an impressive website (jstevenmanolisart.com) so that surveying his extensive collection of works is like entering a museum but without the distractions. For those of you who descend on Miami during Art Basel Week, visiting him at his annual open house in Manolis Projects, his massive 5000 sq. ft. studio, is a memorable experience (and the studio is open by appointment year-round as well). Advance reservations are recommended. On the other hand, if you share this natural enthusiasm and would like to receive illustrated catalogs on recent exhibitions, you can contact Manolis Projects directly at: 786.360.2833

—Bruce Helander is an artist who writes on art. He is the former Provost of the Rhode Island School of Design and a former White House Fellow of the National Endowment for the Arts, He is a member of the Florida Artists Hall of Fame and the former Editor- in-Chief of The Art Economist. 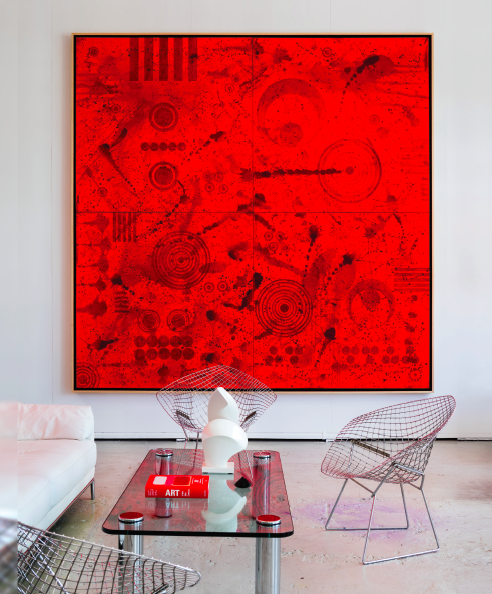 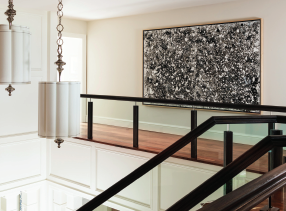 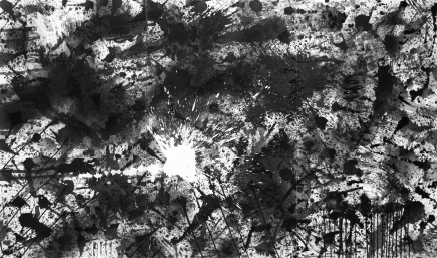 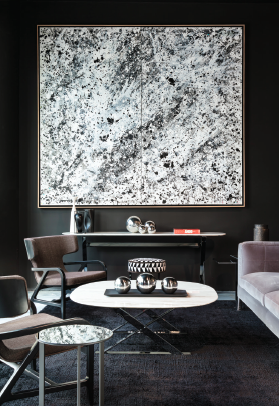